Quality of life in Bilbao

Bilbao, Spain, features a very safe living environment. According to our city rankings, this is a good place to live with high ratings in housing, business freedom and healthcare.

1
246/266
Details
Sign up to get a free city match score based on your personal preferences
</> EmbedFeedback
Sign up for a free Teleport account to personalize city data.Budget your housing and living costs, salaries and jobs.
Get started

Costs of living in Bilbao are in the 133rd place of all 248 Teleport cities and the most expensive in Spain. Sign up for free to get access to our cost of living index and use our international  cost of living calculator to do cost comparison by city.

Software Engineer salaries in Bilbao are below average. For this job type, Bilbao ranks 159th for salaries among 265 cities. Get access to our salary comparison calculator by signing up. Compare salaries city by city with our free salary wizard and convert your own salary to a local salary in Bilbao.

Do locals recommend living in Bilbao?

What could Bilbao do better?#improveBilbao

How could Bilbao improve to make it a more liveable city? We will make sure that the local government will know about the suggestions that reach enough votes.
Popular|Latest
Status
You can be the first! 😊  Tell us something that can be improved about your city.

What makes Bilbao a special place?#praiseBilbao

Is Bilbao a great place to live? What makes it special for you? What makes it liveable? What should others know about? Why should they move here? Why do you love it?
Popular|Latest
Status
You can be the first! 😊  Tell us something nice about your city.
Feedback

The overall crime rate puts Bilbao in position 51 of 266 Teleport Cities in a ranking for the safest cities.

Required with citizenship of
Get more information about visas in Bilbao here
Feedback
Sign up for a free Teleport account to personalize city data.Budget your housing and living costs, salaries and jobs.
Get started

Explore the streets of Bilbao

Find on Facebook
Find out which of your friends are living in Bilbao. Nothing is better than knowing a local 😉
Feedback

A video by Pierrick Servais 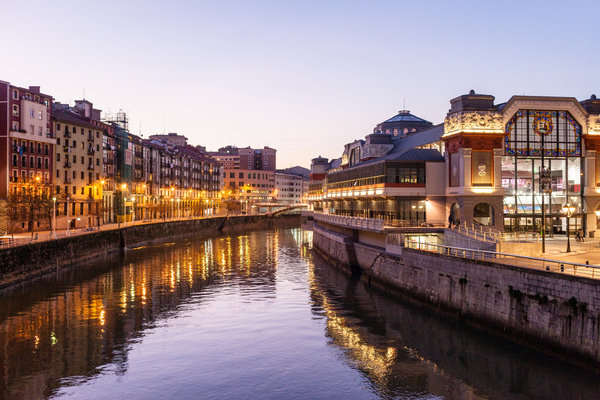 Beyond Bilbao’s Guggenheim museum, there’s much to explore, from Michelin-star restaurants and medieval streets, to a bar run by a world-class mixologist....

On living in Bilbao

Situated on the banks of the Nervión, Bilbao is the largest city in Spain's Basque Country. Milder and rainier than most other parts of Spain (temperatures here rarely fall below freezing in winter nor rise much above 25°C even in the height of summer), the greenery of Bilbao is both a blessing and a curse: the climate here is as much a welcome relief from the heat of the dry plains in the south as a thorn in the side of those hoping for a day at the beach. But the shore of the Bay of Biscay isn't really the main attraction—instead, Bilbao is perhaps the best place in the world to experience the ancient culture and language of the Basque people, which has stubbornly held its own over thousands of years and is now completely unlike any modern-day culture in Europe.

All buses to other provinces leave from the TermiBus terminal. There are regular connections to Santander (75 minutes) San Sebastian (60 minutes) and Madrid (arriving at Avenida de América bus station, 4–5 hours) among others.

The bus companies connect Bilbao with many cities in Spain more cheaply and frequently than the rail companies.