Quality of life in Brisbane

Brisbane, Australia, is among the top cities with a free business environment. According to our city rankings, this is a good place to live with high ratings in safety, healthcare and environmental quality.

Brisbane is one of the top ten city matches for 0.7% of Teleport users.

6
29/266
Details
Sign up to get a free city match score based on your personal preferences
</> EmbedFeedback
Sign up for a free Teleport account to personalize city data.Budget your housing and living costs, salaries and jobs.
Get started

Costs of living in Brisbane are in the 166th place of all 248 Teleport cities. Sign up for free to get access to our cost of living index and use our international  cost of living calculator to do cost comparison by city.

Software Engineer salaries in Brisbane are above average. For this job type, Brisbane ranks 72nd for salaries among 265 cities. Get access to our salary comparison calculator by signing up. Compare salaries city by city with our free salary wizard and convert your own salary to a local salary in Brisbane.

Do locals recommend living in Brisbane?

What could Brisbane do better?#improveBrisbane

How could Brisbane improve to make it a more liveable city? We will make sure that the local government will know about the suggestions that reach enough votes.
Popular|Latest
Status
You can be the first! 😊  Tell us something that can be improved about your city.

What makes Brisbane a special place?#praiseBrisbane

Is Brisbane a great place to live? What makes it special for you? What makes it liveable? What should others know about? Why should they move here? Why do you love it?
Popular|Latest
Status
You can be the first! 😊  Tell us something nice about your city.
Feedback

The overall crime rate puts Brisbane in position 86 of 266 Teleport Cities in a ranking for the safest cities.

Get more information about visas in Brisbane here
Feedback
Sign up for a free Teleport account to personalize city data.Budget your housing and living costs, salaries and jobs.
Get started

Explore the streets of Brisbane

Find on Facebook
Find out which of your friends are living in Brisbane. Nothing is better than knowing a local 😉
Feedback

Teleport users who are      Brisbane 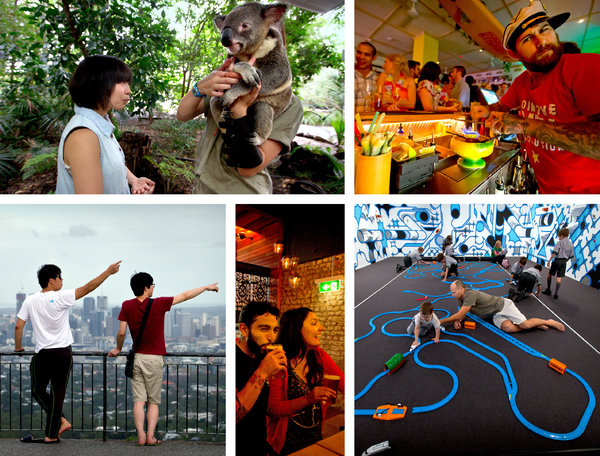 On living in Brisbane

Brisbane is the state capital of Queensland. The Greater Brisbane region has a population of about 2.2 million people, making it the third-largest city in Australia.

Large enough to be cosmopolitan yet small enough to be friendly and accessible, Brisbane is a 'garden metropolis' famous for its leafy, open spaces and the pleasant pace of life that unfolds between the zig-zags of its iconic river. Gaining international exposure during the 1982 Commonwealth Games, the 1988 World Expo, the 2001 Goodwill Games, and the 2014 G20 Summit, Brisbane's year-round warm climate, spectacular scenery, pleasant locals and world-class facilities have been the draw-cards for many domestic and international visitors, making Brisbane the fastest-growing city in Australia. Despite this rapid development, it maintains a youthful enthusiasm and has what is arguably one of the most laid-back and forward-thinking of any Australian capital city.

For many thousands of years prior to European settlement, the Brisbane area was inhabited by the Turrbal and Jagera Aboriginal people. They knew the area that is now the central business district as Mian-jin, meaning "place shaped as a spike". The Australian English phrase "hard yakka" – meaning "hard work" – comes from the Jagera people, and is certainly what the European settlers faced in Brisbane's humid sub-tropical climate.