Quality of life in Dresden

Dresden, Germany, is among the top cities with a free business environment. According to our city rankings, this is a good place to live with high ratings in housing, safety and healthcare.

5
140/266
Details
Sign up to get a free city match score based on your personal preferences
</> EmbedFeedback
Sign up for a free Teleport account to personalize city data.Budget your housing and living costs, salaries and jobs.
Get started

Costs of living in Dresden are in the 110th place of all 248 Teleport cities. Sign up for free to get access to our cost of living index and use our international  cost of living calculator to do cost comparison by city.

Software Engineer salaries in Dresden are below average. For this job type, Dresden ranks 158th for salaries among 265 cities. Get access to our salary comparison calculator by signing up. Compare salaries city by city with our free salary wizard and convert your own salary to a local salary in Dresden.

Do locals recommend living in Dresden?

What could Dresden do better?#improveDresden

How could Dresden improve to make it a more liveable city? We will make sure that the local government will know about the suggestions that reach enough votes*.
*Suggestions will be delivered to: Mayor of Dresden - Dirk Hilbert
Popular|Latest
Status
You can be the first! 😊  Tell us something that can be improved about your city.

What makes Dresden a special place?#praiseDresden

Is Dresden a great place to live? What makes it special for you? What makes it liveable? What should others know about? Why should they move here? Why do you love it?
Popular|Latest
Status
You can be the first! 😊  Tell us something nice about your city.
Feedback

The overall crime rate puts Dresden in position 35 of 266 Teleport Cities in a ranking for the safest cities.

Required with citizenship of
Get more information about visas in Dresden here
Feedback
Sign up for a free Teleport account to personalize city data.Budget your housing and living costs, salaries and jobs.
Get started

Explore the streets of Dresden

Find on Facebook
Find out which of your friends are living in Dresden. Nothing is better than knowing a local 😉
Feedback

Teleport users who are      Dresden 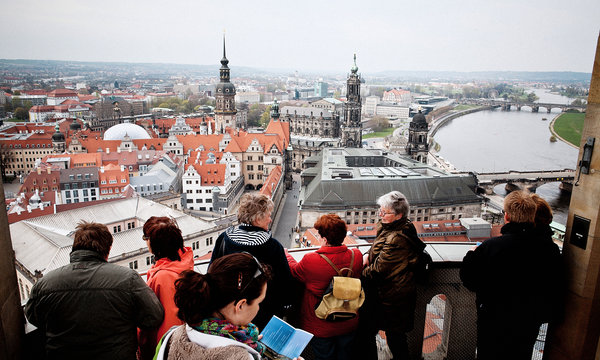 In this city on the Elbe, once known as the “Florence of the North,” cultural treasures, lively restaurants and trendy shops coexist with the residue of a dark history.

On living in Dresden

Dresden is the capital of Saxony (Sachsen). It's often referred to locally as Elbflorenz, or "Florence on the Elbe", reflecting its location on the Elbe river and its historical role as a centre for the arts and beautiful architecture - much like Florence in Italy. While Florence flourished during the early renaissance, the Golden Age of Dresden was in the 18th century when, under August the Strong and his son, Friedrich August II, Saxony was a rich and important state and the rulers invested in lush architectural projects in their capital and supported artists of worldwide renown.

Although Dresden suffered catastrophic damage from allied bombing in 1945 and then lost much of its remaining architectural heritage at the hands of East German socialist city planners, the city managed to resurrect its charm by rebuilding the most important landmarks, culminating with the reconstruction of the famous Frauenkirche- completed just in time for the what was marketed as the city's 800th birthday in 2006 - dated from the first mention in extant historical documents, as is common in Germany.

Today, Dresden remains a charming, relaxed and in many ways beautiful city and has become a very popular tourist destination, in addition to being a regional economic, political and academic centre. About ten million tourists visit Dresden annually, most from within Germany. International visitors most frequently come from the Czech Republic, the USA, Russia and Japan.