Quality of life in Galway

Galway, Ireland, features a very safe living environment. According to our city rankings, this is a good place to live with high ratings in business freedom, healthcare and environmental quality.

4
199/266
Details
Sign up to get a free city match score based on your personal preferences
</> EmbedFeedback
Sign up for a free Teleport account to personalize city data.Budget your housing and living costs, salaries and jobs.
Get started

Costs of living in Gaillimh are in the 191st place of all 248 Teleport cities. Sign up for free to get access to our cost of living index and use our international  cost of living calculator to do cost comparison by city.

Software Engineer salaries in Galway are above average. For this job type, Galway ranks 129th for salaries among 265 cities. Get access to our salary comparison calculator by signing up. Compare salaries city by city with our free salary wizard and convert your own salary to a local salary in Galway.

Do locals recommend living in Galway?

What could Galway do better?#improveGalway

How could Galway improve to make it a more liveable city? We will make sure that the local government will know about the suggestions that reach enough votes*.
*Suggestions will be delivered to: Mayor of Galway - Donal Lyons
Popular|Latest
Status
You can be the first! 😊  Tell us something that can be improved about your city.

What makes Galway a special place?#praiseGalway

Is Galway a great place to live? What makes it special for you? What makes it liveable? What should others know about? Why should they move here? Why do you love it?
Popular|Latest
Status
You can be the first! 😊  Tell us something nice about your city.
Feedback

The overall crime rate puts Galway in position 54 of 266 Teleport Cities in a ranking for the safest cities.

Get more information about visas in Galway here
Feedback
Sign up for a free Teleport account to personalize city data.Budget your housing and living costs, salaries and jobs.
Get started

Explore the streets of Galway

Find on Facebook
Find out which of your friends are living in Galway. Nothing is better than knowing a local 😉
Feedback

Teleport users who are      Galway

A video by Galway City 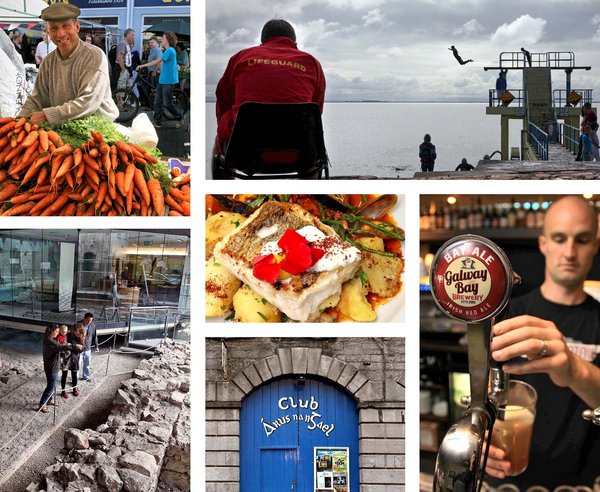 Nestled along the country’s western coast, Galway is often called Ireland’s most Irish city. And while you can still get a Guinness served with Gaelic, a global flavor is emerging.

On living in Galway

Galway, or Gaillimh in Irish, with a population of over 70,000, is Ireland's fifth largest city and a major hub for visits to West Ireland. It has long been known as "The City of the Tribes" and this title could not be more appropriate these days, given the multicultural vibrancy of present-day Galway.

Galway, known as the City of the Tribes, is an important tourist centre and a gateway to the scenic areas of the county. Beginning in the 15th century, Galway was ruled by the leading fourteen merchant families, which were known as "tribes". The names of these mostly Anglo-Norman families were Athy, Blake, Bodkin, Browne, D'arcy, Deane, Font, ffrench, Joyce, Kirwan, Lynch, Martin, Morris, and Skerritt. Only two of the families were Celts.

The families built many castles throughout County Galway. Many streets and landmarks bear the names of these early "tribes".