Quality of life in Helsinki

Helsinki is a unique mix of influences from the Nordics and the East. The city center is small enough to navigate by foot but offers a thriving underground cultural scene and more than 50 annual city festivals. Finland is a world leader in clean technology and Helsinki is very environmentally conscious with 90% of all bottles and cans recycled. The society prides itself on one of the best primary and secondary education systems in the world, equal opportunity and tolerance, creating a high standard of living and welcoming environment for innovation and tech start-ups.

Helsinki is one of the top ten city matches for 3.6% of Teleport users.

5
131/266
Details
Sign up to get a free city match score based on your personal preferences
</> EmbedFeedback
Sign up for a free Teleport account to personalize city data.Budget your housing and living costs, salaries and jobs.
Get started

Software Engineer salaries in Helsinki are above average. For this job type, Helsinki ranks 121st for salaries among 265 cities. Get access to our salary comparison calculator by signing up. Compare salaries city by city with our free salary wizard and convert your own salary to a local salary in Helsinki.

Do locals recommend living in Helsinki?

What could Helsinki do better?#improveHelsinki

How could Helsinki improve to make it a more liveable city? We will make sure that the local government will know about the suggestions that reach enough votes*.
*Suggestions will be delivered to: Mayor of Helsinki - Jussi Pajunen
Popular|Latest
Status
You can be the first! 😊  Tell us something that can be improved about your city.

What makes Helsinki a special place?#praiseHelsinki

Is Helsinki a great place to live? What makes it special for you? What makes it liveable? What should others know about? Why should they move here? Why do you love it?
Popular|Latest
Status
You can be the first! 😊  Tell us something nice about your city.
Feedback

The overall crime rate puts Helsinki in position 32 of 266 Teleport Cities in a ranking for the safest cities.

Required with citizenship of
Get more information about visas in Helsinki here
Feedback
Sign up for a free Teleport account to personalize city data.Budget your housing and living costs, salaries and jobs.
Get started

Explore the streets of Helsinki

Find on Facebook
Find out which of your friends are living in Helsinki. Nothing is better than knowing a local 😉
Feedback

Teleport users who are      Helsinki 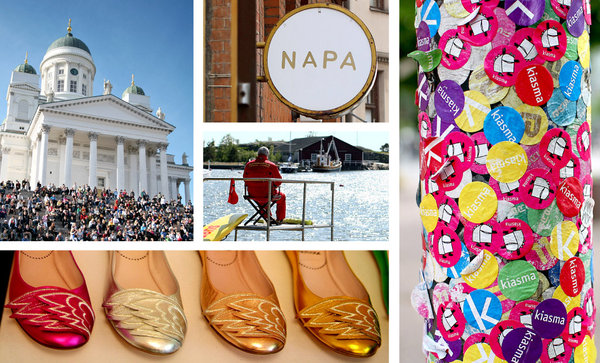 As Helsinki celebrates a major anniversary and its status as World Design Capital, spend a weekend discovering the city’s creative energy and its long, sun-soaked days.

On living in Helsinki

The "Daughter of the Baltic", Helsinki (Finnish) (Helsingfors in Swedish) is Finland's capital and largest city. Founded in 1550, Helsinki became the capital of the Finnish Grand Duchy in 1812, when the Russian Empire rebuilt it as a miniature St. Petersburg, a role it has played in many a Cold War movie. Today, Helsinki is a city of 600,000 people, combining the atmosphere of an international metropolis with the coziness of a small town. The city is best seen during its short summers, when the sun brings the outdoor bars and cafés to life and even the nights are light. While visiting in winter is more of a challenge, Helsinki is one of few large cities in Europe with a good chance for snow on Christmas.

The city of Helsinki forms the core of Finland's largest urban area, known in Finnish as the "capital area" (pääkaupunkiseutu). Helsinki is bordered by the Gulf of Finland to the south, while the posh suburban city of Espoo, with the embedded tiny enclave city of Kauniainen, is to the west. The more industrialized city of Vantaa is to the north and east. Beyond these three, the suburbs rapidly give way to small towns, farms and forests, most notably Nuuksio National Park at the intersection of Espoo, Vihti and Kirkkonummi.

Within Helsinki itself, the city center is on the southern peninsula at the end of the city's main thoroughfare Mannerheimintie (or just Mansku). Both the central railway station and the main bus terminal are in the city center. Shopping streets Aleksanterinkatu (or Aleksi for short) and Esplanadi (or Espa) connect to Senate Square (Senaatintori), the historical center of the city. See the Helsinki Guide Map for an interactive searchable map of the city.

Helsinki Business Hub
You know your business needs, we know the opportunities in Helsinki region. Let's hook up?
Startup Sauna
Accelerating the most promising startups of Nordics, Eastern Europe, and Russia.
Slush
Slush is the focal point for startups and tech talent to meet with top-tier international investors, executives and media.
Startup100
Startup100 ranks Finnish startups monthly based on online marketing activities and performance.
Aaltoes
Aaltoes organizes networking events, trips, and a summer accelerator program among other things in order to strengthen the Finnish startup community.
Feedback