Quality of life in Hyderabad

Hyderabad, India, differentiates itself with low living costs. According to our city rankings, this is a good place to live with high ratings in housing, startups and safety.

3
221/266
Details
Sign up to get a free city match score based on your personal preferences
</> EmbedFeedback
Sign up for a free Teleport account to personalize city data.Budget your housing and living costs, salaries and jobs.
Get started

Costs of living in Hyderabad are in the least expensive 10 percent of all 248 Teleport cities. Average living expenses are significantly lower compared to other cities, especially in the housing market. Moving to Hyderabad will very likely decrease your daily costs of living. Sign up for free to get access to our cost of living index and use our international  cost of living calculator to do cost comparison by city.

Software Engineer salaries in Hyderabad are low. For this job type, Hyderabad ranks 212th for salaries among 265 cities. Get access to our salary comparison calculator by signing up. Compare salaries city by city with our free salary wizard and convert your own salary to a local salary in Hyderabad.

Do locals recommend living in Hyderabad?

What could Hyderabad do better?#improveHyderabad

How could Hyderabad improve to make it a more liveable city? We will make sure that the local government will know about the suggestions that reach enough votes*.
*Suggestions will be delivered to: Mayor of Hyderabad - Bonthu Ram Mohan
Popular|Latest
Status
You can be the first! 😊  Tell us something that can be improved about your city.

What makes Hyderabad a special place?#praiseHyderabad

Is Hyderabad a great place to live? What makes it special for you? What makes it liveable? What should others know about? Why should they move here? Why do you love it?
Popular|Latest
Status
You can be the first! 😊  Tell us something nice about your city.
Feedback

The overall crime rate puts Hyderabad in position 107 of 266 Teleport Cities in a ranking for the safest cities.

Required with citizenship of
Get more information about visas in Hyderabad here
Feedback
Sign up for a free Teleport account to personalize city data.Budget your housing and living costs, salaries and jobs.
Get started

Explore the streets of Hyderabad

Find on Facebook
Find out which of your friends are living in Hyderabad. Nothing is better than knowing a local 😉
Feedback

Teleport users who are      Hyderabad 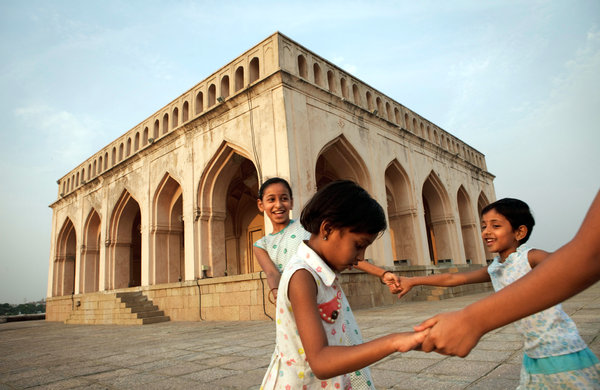 On living in Hyderabad

Hyderabad, the pearl city of India, is the capital of Telangana in Southern India, located on the banks of the Musi River and on the Deccan Plateau. Hyderabad and Secunderabad are "twin cities" near Hussain Sagar Lake (also known as Tank Bund in local parlance) but both cities have grown so much that now they have become one big metropolis. The city and district of Hyderabad are coterminous. Hyderabad district is entirely contained within the Ranga Reddy district of Telangana. Many of the suburbs of Hyderabad were recently merged into the city, now called Greater Hyderabad.

A city rich with history and tradition, Hyderabad now competes with Bangalore, Chennai for the crown of India's IT capital; Microsoft and Google have their India headquarters here.

Two important water bodies - the Musi river and the Hussain Sagar Lake - define much of Hyderabad's geography. They also influenced the city's history.