Quality of life in Kiev

With a history going back more than 1500 years, Kiev today is an economic and industrial center of Eastern Europe. Known for its river-front location and historical landmarks, Kiev continues to develop, and boasts several international companies serving Ukraine's large domestic market. Its expansive infrastructure offers some of the cheapest metro services in Europe, there are great leisure-time opportunities and the overall cost of living is very reasonable.

Kiev is one of the top ten city matches for 4.4% of Teleport users.

5
89/266
Details
Sign up to get a free city match score based on your personal preferences
</> EmbedFeedback
Sign up for a free Teleport account to personalize city data.Budget your housing and living costs, salaries and jobs.
Get started

Costs of living in Kyiv are in the least expensive 10 percent of all 248 Teleport cities. Average living expenses are significantly lower compared to other cities, especially in the housing market. Moving to Kyiv will very likely decrease your daily costs of living. Sign up for free to get access to our cost of living index and use our international  cost of living calculator to do cost comparison by city.

Software Engineer salaries in Kiev are very low. For this job type, Kiev ranks 247th for salaries among 265 cities. Get access to our salary comparison calculator by signing up. Compare salaries city by city with our free salary wizard and convert your own salary to a local salary in Kiev.

Do locals recommend living in Kiev?

What could Kiev do better?#improveKiev

How could Kiev improve to make it a more liveable city? We will make sure that the local government will know about the suggestions that reach enough votes*.
*Suggestions will be delivered to: Mayor of Kiev - Vitali Klitschko
Popular|Latest
Status
You can be the first! 😊  Tell us something that can be improved about your city.

What makes Kiev a special place?#praiseKiev

Is Kiev a great place to live? What makes it special for you? What makes it liveable? What should others know about? Why should they move here? Why do you love it?
Popular|Latest
Status
You can be the first! 😊  Tell us something nice about your city.
Feedback

The overall crime rate puts Kiev in position 178 of 266 Teleport Cities in a ranking for the safest cities.

Required with citizenship of
Get more information about visas in Kiev here
Feedback
Sign up for a free Teleport account to personalize city data.Budget your housing and living costs, salaries and jobs.
Get started

Explore the streets of Kiev

Find on Facebook
Find out which of your friends are living in Kiev. Nothing is better than knowing a local 😉
Feedback

Teleport users who are      Kiev

Powered by Equaldex
</> EmbedFeedback
Sign up for a free Teleport account to personalize city data.Budget your housing and living costs, salaries and jobs.
Get started

A video by Oleg Prylutskyi 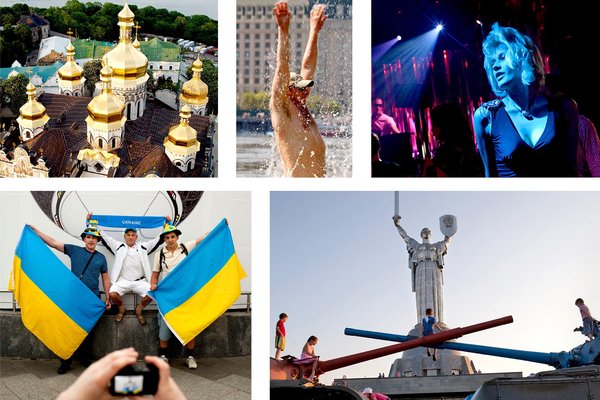 Currently co-host of the 2012 European Soccer Championship, Kiev has become a vibrant 21st-century city. But today’s attractions are just the beginning of the capital’s story.

On living in Kiev

Kiev (Ukrainian: Київ, Russian: Киев), Europe's city of intrigue, is the capital of Ukraine and its largest and most vibrant city with 3 million inhabitants. It is in the north of central Ukraine on the Dnieper River (Ukrainian: Днiпро, Russian: Днепр).

The Ukrainians are understandably very proud of their capital's role in establishing European civilisation in Eastern Europe. Kiev is one of the oldest cities in Eastern Europe, dating back to the 5th century, although settlements at this location existed much earlier. By the late 9th century, Kiev was at the centre of an emerging Eastern Slavic state. Between the 10th and early 13th centuries, the city reached its golden age as the capital of the first Ukrainian state known today as Kievan Rus, (Kyivan Ruthenia, or Rus-Ukraine). It was this state that shaped the religious and cultural foundations of the modern Slavic eastern European states. In the middle of the 13th century, Kievan Rus was overrun by the Mongols. Later that century, Kiev became part of the Grand Duchy of Lithuania. In 1569 the city was absorbed into the Polish-Lithuanian Commonwealth. In 1654 the Cossack, Hetman Bohdan Khmelnytsky, "liberated" Kiev from that Commonwealth but then promptly folded it into Russian hegemony in an action that continues to be a sore point for Ukrainian nationalists.