Quality of life in Ljubljana

Ljubljana, Slovenia, features a very safe living environment. According to our city rankings, this is a good place to live with high ratings in housing, cost of living and business freedom.

Ljubljana is one of the top ten city matches for 1.7% of Teleport users.

2
238/266
Details
Sign up to get a free city match score based on your personal preferences
</> EmbedFeedback
Sign up for a free Teleport account to personalize city data.Budget your housing and living costs, salaries and jobs.
Get started

Costs of living in Ljubljana are in the 83rd place of all 248 Teleport cities. Sign up for free to get access to our cost of living index and use our international  cost of living calculator to do cost comparison by city.

Software Engineer salaries in Ljubljana are below average. For this job type, Ljubljana ranks 170th for salaries among 265 cities. Get access to our salary comparison calculator by signing up. Compare salaries city by city with our free salary wizard and convert your own salary to a local salary in Ljubljana.

Do locals recommend living in Ljubljana?

What could Ljubljana do better?#improveLjubljana

How could Ljubljana improve to make it a more liveable city? We will make sure that the local government will know about the suggestions that reach enough votes*.
*Suggestions will be delivered to: Mayor of Ljubljana - Zoran Janković
Popular|Latest
Status
You can be the first! 😊  Tell us something that can be improved about your city.

What makes Ljubljana a special place?#praiseLjubljana

Is Ljubljana a great place to live? What makes it special for you? What makes it liveable? What should others know about? Why should they move here? Why do you love it?
Popular|Latest
Status
You can be the first! 😊  Tell us something nice about your city.
Feedback

The overall crime rate puts Ljubljana in position 33 of 266 Teleport Cities in a ranking for the safest cities.

Required with citizenship of
Get more information about visas in Ljubljana here
Feedback
Sign up for a free Teleport account to personalize city data.Budget your housing and living costs, salaries and jobs.
Get started

Explore the streets of Ljubljana

Find on Facebook
Find out which of your friends are living in Ljubljana. Nothing is better than knowing a local 😉
Feedback

Teleport users who are      Ljubljana 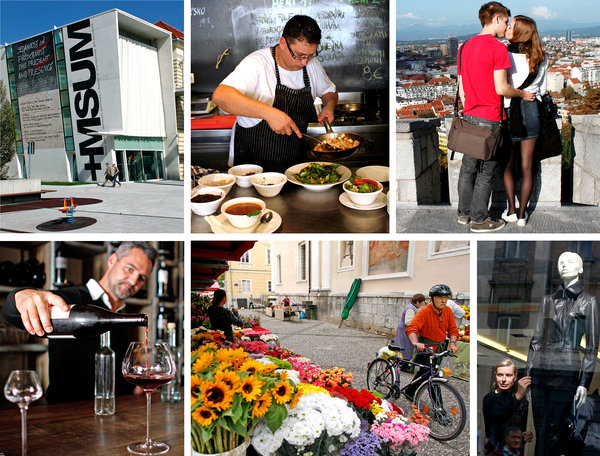 On living in Ljubljana

Ljubljana ("lyoo-blah-nah"), the capital of Slovenia, is a charming old city full of artists, museums, and galleries. In Roman times, it was called Colonia Iulia Aemona and was part of Province X "Venetia et Histria" of Italia proper. With a population of 300,000, it is one of the smallest capital cities in Europe. Ljubljana is pronounced similar to 'ljubljena' ('beloved') in Slovenian, but it's not clear if the words are related.

Ljubljana has no world-famous attractions, which is just great: there's no need to hop from one place to another, taking photos and crossing off the items on your checklist. You have all the time to stroll around and enjoy the city itself. Ljubljana is noted as one of the greenest capitals in Europe; a pair of green hills, one of them sporting the city's major attraction (Ljubljana Castle) approach the centre like two opposing wedges, so forest with an extensive network of footpaths is literally across the street from the old town.

In the summer, its centre hosts a number of city sponsored events, from children's workshops and public playgrounds on the streets that get closed for traffic for the occasion, to Trnfest's off-beat street performances and musical events of all genres. In autumn it shows its academic face as it fills again with students of the state's largest university to whom the city owes much of its youthful character. Cold December days are warmed by thousands of lights, the New Year's decorations conceived by local artists, and by food and drinks sold from street stands on the banks of the Ljubljanica river. After surviving the boring grey remaining of winter, the city erupts again with spring flowers planted on its streets and crossroads.