Quality of life in Tallinn

With its stunning old town and high tech culture, Tallinn offers a unique blend of history and the modern 21st century living. It is among the most wired cities in the world, offering universal free public wifi and free public transportation for residents. The vibrant start-up scene is actively supported by the government and the city's strong tech eco-system. With low tax rates, cost of living and the seaside location, Tallinn is a truly inviting place to live.

Tallinn is one of the top ten city matches for 14.5% of Teleport users.

5
152/266
Details
Sign up to get a free city match score based on your personal preferences
</> EmbedFeedback
Sign up for a free Teleport account to personalize city data.Budget your housing and living costs, salaries and jobs.
Get started

Costs of living in Tallinn are in the 81st place of all 248 Teleport cities. Sign up for free to get access to our cost of living index and use our international  cost of living calculator to do cost comparison by city.

Software Engineer salaries in Tallinn are below average. For this job type, Tallinn ranks 171st for salaries among 265 cities. Get access to our salary comparison calculator by signing up. Compare salaries city by city with our free salary wizard and convert your own salary to a local salary in Tallinn.

Do locals recommend living in Tallinn?

What could Tallinn do better?#improveTallinn

How could Tallinn improve to make it a more liveable city? We will make sure that the local government will know about the suggestions that reach enough votes*.
*Suggestions will be delivered to: Mayor of Tallinn - Taavi Aas
Popular|Latest
Status
You can be the first! 😊  Tell us something that can be improved about your city.

What makes Tallinn a special place?#praiseTallinn

Is Tallinn a great place to live? What makes it special for you? What makes it liveable? What should others know about? Why should they move here? Why do you love it?
Popular|Latest
Status
You can be the first! 😊  Tell us something nice about your city.
Feedback

The overall crime rate puts Tallinn in position 22 of 266 Teleport Cities in a ranking for the safest cities.

Get more information about visas in Tallinn here
Feedback
Sign up for a free Teleport account to personalize city data.Budget your housing and living costs, salaries and jobs.
Get started

Explore the streets of Tallinn

Find on Facebook
Find out which of your friends are living in Tallinn. Nothing is better than knowing a local 😉
Feedback

Teleport users who are      Tallinn

A video by Jaan Kronberg 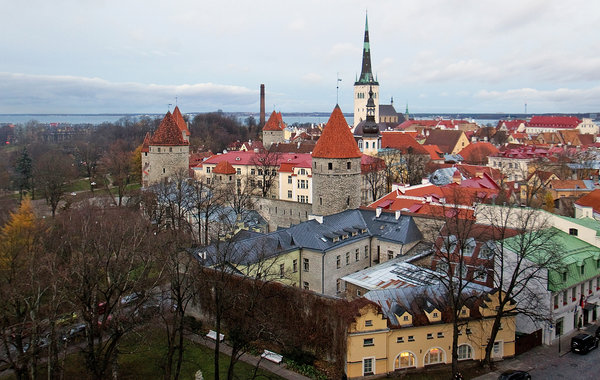 While Old Town still trades on its medieval past, 21st-century attractions are coming to the fore in Estonia’s capital.

On living in Tallinn

Tallinn is Estonia's capital and largest city, located at the Gulf of Finland. A city of over 400,000 inhabitants, it is home to a third of the country's population, and besides serving as the national capital, it is also the capital of Harju County in Northern Estonia.

Tallinn has been and continues to be an important port of the Baltic Sea, with the busy passenger section of the port reaching the foothill of the picturesque medieval Old Town, which has been astonishingly well preserved and was inscribed on the UNESCO World Heritage List in 1997. In a striking contrast, the immediate outskirts thereof are filled with a cluster of modern office towers, with intermittent architectural monuments to the Soviet era. Further out, you will find a bewildering variety of historic and modern neighbourhoods, religious, civic, industrial and maritime heritage. This all provides for the city seeing very sizeable tourist traffic given its size, which in turn means the infrastructure is robust and extensive.

Tallinn is a historic city dating back to medieval times. The first fortress on Toompea was built in 1050 and Tallinn was first recorded on a world map in 1154. In 1219, the city was conquered by Valdemar II of Denmark, but it was soon sold to the Hanseatic League in 1285. The city, known as Reval at the time, prospered as a trading town in the 14th century, and much of Tallinn's historic centre was built at this time.

Work in Estonia
Do you want to step into the future? Work and live in a paperless digital and tech-savvy society, where innovation and forward-looking ideas are cherished? Life is too short for a slow career movement in a place with a poor prospect for the future. Make a change – Work in Estonia!
Startup Garage
Startup Garage is a student-led initiative to encourage​ technology-based entrepreneurship.​
Garage48
Turn your idea into a working service in 48h!
Startup Wise Guys
Startup Wise Guys BusinessTech is the leading B2B Software accelerator in Europe, located in Tallinn, Estonia. Our goal is to build a bridge of innovation connecting startups from around the world to experts from the EU, UK and the US.
Tehnopol
Tallinn Science Park Tehnopol is a business environment with more than 150 technology based companies.
Feedback