Quality of life in Toronto

Toronto is a multicultural city in every sense of the word. Nearly half of its population are immigrants from virtually every corner of the globe. The city is internationally known as a center of finance and business as well as the film and television industry. However, there are still plenty of ways to unwind, be it hiking in the nature with breathtaking views or immersing in the local cultural scene.

Toronto is one of the top ten city matches for 39.4% of Teleport users.

6
58/266
Details
Sign up to get a free city match score based on your personal preferences
</> EmbedFeedback
Sign up for a free Teleport account to personalize city data.Budget your housing and living costs, salaries and jobs.
Get started

Costs of living in Toronto are in the 159th place of all 248 Teleport cities. Average living expenses are significantly higher compared to other cities, especially in the housing market. Sign up for free to get access to our cost of living index and use our international  cost of living calculator to do cost comparison by city.

Software Engineer salaries in Toronto are above average. For this job type, Toronto ranks 78th for salaries among 265 cities. Get access to our salary comparison calculator by signing up. Compare salaries city by city with our free salary wizard and convert your own salary to a local salary in Toronto.

Do locals recommend living in Toronto?

What could Toronto do better?#improveToronto

How could Toronto improve to make it a more liveable city? We will make sure that the local government will know about the suggestions that reach enough votes*.
*Suggestions will be delivered to: Mayor of Toronto - John Tory
Popular|Latest
Status
You can be the first! 😊  Tell us something that can be improved about your city.

What makes Toronto a special place?#praiseToronto

Is Toronto a great place to live? What makes it special for you? What makes it liveable? What should others know about? Why should they move here? Why do you love it?
Popular|Latest
Status
You can be the first! 😊  Tell us something nice about your city.
Feedback

The overall crime rate puts Toronto in position 89 of 266 Teleport Cities in a ranking for the safest cities.

Get more information about visas in Toronto here
Feedback
Sign up for a free Teleport account to personalize city data.Budget your housing and living costs, salaries and jobs.
Get started

Explore the streets of Toronto

Find on Facebook
Find out which of your friends are living in Toronto. Nothing is better than knowing a local 😉
Feedback

Teleport users who are      Toronto

A video by Ryan Emond 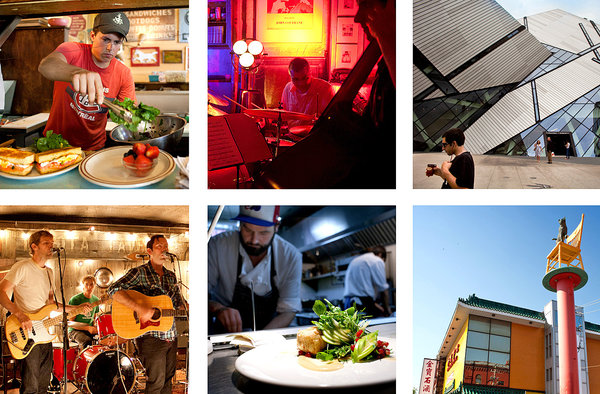 Canada’s largest city swirls together a vibrant mix of markets, music, museums and more. And summer might just be the best time to visit.

On living in Toronto

Toronto is the most populous city in Canada and the provincial capital of Ontario. It is located on the northwestern shore of Lake Ontario. Toronto, with a population of 2.6 million, is at the heart of the Greater Toronto Area (GTA) which contains 6.2 million people. The city is the anchor of the Golden Horseshoe region, which wraps around Lake Ontario from Toronto to Niagara Falls and totals over 8.5 million residents, approximately a quarter of Canada's entire population. Toronto is the fourth largest city and fifth largest urban agglomeration in North America.

Spawned out of post-glacial alluvial deposits and bluffs, the area was populated at different times by Iroquois and later Wyandot (Huron) peoples. The settlement by Europeans started with the French building a seldom occupied fort near today's Exhibition grounds in the mid-1700s, then grew out of a backwoods English trading post established as York in 1793 (reverting to the current name Toronto in 1834). Later in the 19th century, it grew to become the cultural and economic focus of Canada. Owing largely to the country's liberal immigration policies starting in the 1960s, and the region's strong economy, Toronto has, in recent decades, been transformed into one of the most culturally and ethnically diverse cities in the world. More than 80 ethnic communities are represented, and over half of the city's residents were born outside Canada.

When Metropolitan Toronto was amalgamated in 1998, its six former municipalities became one new "mega-city". Toronto is made up of varied and unique neighbourhoods. Covering more than 600 km², Toronto stretches some 32 km along the shores of Lake Ontario. The city is laid out on a very straightforward grid pattern and streets rarely deviate from the grid, except in cases where topography interferes such as the indented, curved Don River Valley and to a lesser degree the Humber and Rouge valleys at opposite ends of the city. Some main thoroughfares intersect the grid at angles. For travel purposes, we have divided Toronto into twelve districts: