Quality of life in Zagreb

Zagreb, Croatia, is characterized by reasonably priced housing. According to our city rankings, this is a good place to live with high ratings in cost of living, safety and environmental quality.

Zagreb is one of the top ten city matches for 1.3% of Teleport users.

5
128/266
Details
Sign up to get a free city match score based on your personal preferences
</> EmbedFeedback
Sign up for a free Teleport account to personalize city data.Budget your housing and living costs, salaries and jobs.
Get started

Costs of living in Zagreb are in the 77th place of all 248 Teleport cities. Average living expenses are significantly lower compared to other cities, especially in the housing market. Sign up for free to get access to our cost of living index and use our international  cost of living calculator to do cost comparison by city.

Software Engineer salaries in Zagreb are low. For this job type, Zagreb ranks 234th for salaries among 265 cities. Get access to our salary comparison calculator by signing up. Compare salaries city by city with our free salary wizard and convert your own salary to a local salary in Zagreb.

Do locals recommend living in Zagreb?

What could Zagreb do better?#improveZagreb

How could Zagreb improve to make it a more liveable city? We will make sure that the local government will know about the suggestions that reach enough votes*.
*Suggestions will be delivered to: Mayor of Zagreb - Milan Bandić
Popular|Latest
Status
You can be the first! 😊  Tell us something that can be improved about your city.

What makes Zagreb a special place?#praiseZagreb

Is Zagreb a great place to live? What makes it special for you? What makes it liveable? What should others know about? Why should they move here? Why do you love it?
Popular|Latest
Status
You can be the first! 😊  Tell us something nice about your city.
Feedback

The overall crime rate puts Zagreb in position 38 of 266 Teleport Cities in a ranking for the safest cities.

Required with citizenship of
Get more information about visas in Zagreb here
Feedback
Sign up for a free Teleport account to personalize city data.Budget your housing and living costs, salaries and jobs.
Get started

Explore the streets of Zagreb

Find on Facebook
Find out which of your friends are living in Zagreb. Nothing is better than knowing a local 😉
Feedback

Teleport users who are      Zagreb 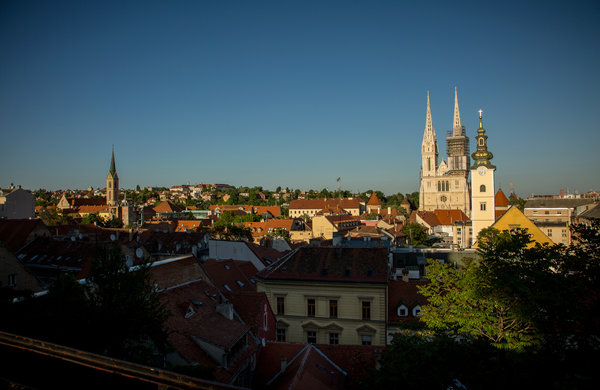 No longer just a stop on the way to the coast, Croatia’s capital has seen a surge in popularity, with lounges, bistros and chic designer ateliers in an Old World setting.

On living in Zagreb

Zagreb is a city in Central Croatia and the capital of Croatia.

Zagreb is a vibrant city of around 800,000 people (metropolitan area: 1,200,000). The city boasts a charming medieval 'old city' with architecture and cobbled streets reminiscent of Vienna, Budapest, Prague and other Central-European capitals. In 2005 it was visited by over half a million tourists, mainly from Austria, Germany and Italy.

Other information points are located at the airport, bus station, railway station and at the Lotrščak Tower.